If you use e-cigarettes or are thinking about vaping as a way to quit smoking, you might be concerned by news reports about potentially dangerous chemicals in e-liquids. Although you can choose from an almost unlimited selection of vaporizer models, all of them contain a heating device that heats the blend of nicotine, flavoring, and chemicals known as vape juice or e-juice. When heated, the liquid turns to vapor that can be inhaled like cigarette smoke. Diacetyl is often mentioned as a toxic ingredient in vaping liquid. Whether you already vape or are planning to switch from tobacco to vaping, these are the facts you need to know about the potential dangers of diacetyl and how to find products without this ingredient.

Diacetyl is a chemical flavoring in liquid form that is used to boost the taste of margarine and other artificial butter products. It can also add a sweet or creamy flavor to processed foods. This yellow-green organic compound is naturally created during the fermentation process used for dairy, alcoholic beverages, and other foods and beverages. It's also commonly used in microwave popcorn. Diacetyl is closely related to another organic compound, acetoin, which has similar properties and applications. Diacetyl is naturally found in trace amounts in a wide range of foods, such as fruit and vegetables. These include apples, artichokes, and beans and legumes. Other foods where you can find diacetyl include coffee, honey, and vinegar. The Food and Drug Administration (FDA) has declared diacetyl as safe for human consumption. However, this only applies to eating or drinking foods that contain this chemical and not necessarily to inhaling its vapors in e-liquid form. 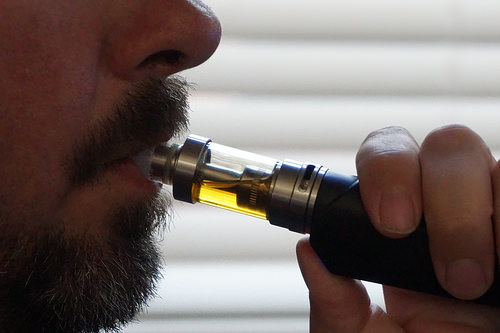 Image via Flickr by Vaper City In a 2015 study published in the clinical journal Environmental Health Perspectives, Harvard researchers found diacetyl in 75 percent of tested e-liquids. Their sample size included eight different brands and several varieties from each brand (a total of 51 samples). However, the study did not indicate that diacetyl inhalation through an e-cigarette can cause respiratory illness. It only noted the need for further research on this issue. A 2014 study by Greek researchers published in the clinical journal Nicotine and Tobacco Research examined e-liquids for the presence of diacetyl and another compound, acetyl propionyl. In reviewing 159 samples of sweet flavors from 36 brands across seven nations, the team from the Onassis Cardiac Surgery Centre found that 74.2 percent of the samples contained either acetyl propionyl or diacetyl. Of the samples that contained these chemicals, most were under the safe levels established by the National Institute for Occupational Safety and Health. However, one brand represented in the study had a level of diacetyl 495 times higher than the safety threshold. Keep in mind that tobacco smoke contains about 336 micrograms of diacetyl while e-liquid vapor has been measured at just 9 micrograms of the chemical. From this standpoint, vaporizing still represents a significant health improvement over smoking cigarettes with tobacco, even when a significant amount of diacetyl is present. In addition, these studies are quite limited in scope. Having only 159 samples in the larger study only scratches the surface of the vast number of e-juice brands, flavors, and formulas available on the marketplace. In fact, the brand VaporFi alone offers more than 50,000 different flavor blends, all which are free of diacetyl. Only certain e-liquid flavors use diacetyl. These have been reported to include pastry, custard, dessert-flavored, and cherry e-juice, although recipes vary by brand. Many brands offer diacetyl-free options, depending on your desired flavor experience. Beginning in 2022, all e-juice companies will be required to submit their products to the Food and Drug Administration (FDA) for review. Until then, vape enthusiasts can choose to purchase from reputable e-juice companies that conduct their own product testing.

Is Diacetyl Safe to Inhale?

The Centers for Disease Control and Prevention (CDC) has associated the development of a deadly lung disease, bronchiolitis obliterans (BO), with the inhalation of diacetyl. In fact, this disease is more commonly called "popcorn lung" and occurred among eight employees at a microwave popcorn factory in Missouri between 1992 and 2000. With popcorn lung, tissue becomes damaged and blocks the passage of air, which makes it difficult to breathe. The symptoms are similar to those of chronic obstructive pulmonary disorder (COPD), which frequently affects tobacco smokers. While COPD develops over time, BO develops within just two to eight weeks. People who have this condition may experience wheezing, a dry cough, fatigue, and shortness of breath, especially during physical activity. Treatment can control BO symptoms and improve quality of life, but the disease eventually leads to respiratory failure. Although learning about popcorn lung is quite alarming for those who use e-liquids that contain diacetyl, the CDC notes that these workers spent hours on end in an environment where the air included 18 parts per million of diacetyl. Vaping is unlikely to result in this consistent exposure over months and even years. In addition, the National Institute for Occupational Safety and Health (NIOSH) found the development of BO in these employees was likely caused by exposure to a range of flavoring chemicals, not just diacetyl. The agency notes that the complex chemical mixture included in most types of artificial flavoring makes it nearly impossible to determine which specific compound is associated with the lung disease. At publication time, no popcorn lung cases have been attributed to using e-cigarettes or to smoking traditional cigarettes that contain tobacco. In fact, this lung condition is extremely rare. In addition to BO's association with flavoring chemicals, it has been associated with exposure to nitrogen oxides, ammonia, and welding fumes, as well as with rheumatoid arthritis and respiratory infections. BO sometimes occurs after a lung transplant as the body rejects the new organ. Despite the fact that the Harvard study did not link diacetyl to the development of popcorn lung, publications such as the official blog of the American Lung Association made erroneous reports to the contrary. For example, a tweet from the American Lung Association stated, "Even though we know that diacetyl causes popcorn lung, this chemical is found in many e-cigarette flavors." This has confused the public about the risks of e-cigarettes, especially compared to the much more significant health hazards that cigarette smoking causes.

If you're concerned about diacetyl, make sure to choose vape juices that trained chemists make in professional labs. Small companies do not necessarily analyze their products for the presence of these chemicals and may not know whether their formulas contain diacetyl. Look for formulas that are free of additives. Vegan e-juice formulas should also be free of diacetyl, since this chemical is created by processing animal products. These are the companies that consistently get high ratings for quality and offer e-liquids that do not contain diacetyl:

If you're not sure whether your favorite e-liquid brand contains diacetyl, your best bet is to choose unflavored juices if you are concerned about exposure to this chemical. Diacetyl is usually only found in brands that rely on artificial flavoring. In addition to choosing products from the brands above, follow these guidelines when shopping for e-liquids:

Is Vaping Safer Than Smoking?

Although research is ongoing, most experts agree that smoking tobacco is more dangerous than vaping e-juice. Vaping allows you to avoid the harmful effects of inhaling tobacco smoke, which contains thousands of toxic chemicals that increase your risk of lung cancer and other diseases. More than 500,000 people are killed by the effects of cigarette smoking every year in the United States. Most experts agree that vaping is at least 80 percent safer than smoking. A study published in the clinical journal Public Health England estimated that it is 95 percent safer than smoking. The risks of inhaling secondhand vapor are also very low, compared to the significant health risks associated with secondhand cigarette smoke. Both cigarettes and e-liquid contain nicotine, which is addictive and should be avoided by people with heart problems and women who are pregnant. However, many people who are addicted to nicotine are able to eliminate the many health risks of smoking by switching to e-cigarettes. Although vaping isn't recommended for teens, some experts attribute the prevalence of e-cigarettes among this age group to the historically low percentage of teens who smoke cigarettes €” just 11 percent in 2015 according to data from the Centers for Disease Control and Prevention.